Skip to primary content
So here’s a quick update on our weekend training catastrophe.  I’m sure Carolyn, Leigh Ann and Meredith will put in their stories as I know everyone remembers thing differently.
First of all, it wasn’t actually a “catastrophe.” I’m being dramatic. It was, however, a good reminder that the mountain always decides our timeline and that no matter how much you prepare and plan, you have to be ready to meet the unexpected with grace and integrity.
We had planned to go up to the Muir snow field to try out gear and to have the first weekend practicing with our sleds.
Saturday was a beautiful day we got lots of great support from the climbing and skiing community as we booted up with our sleds.  Climbing with a sled is a sure indication that you are training for Denali and people out there were psyched! to see an all girl team out there.
We made camp on Saturday around 4pm at 9,000 ft. It was a beautiful night and a beautiful campsite. I love being the in mountains!  In the night the winds picked up. My tent held up great despite the poles really flexing into Leigh Ann’s face.  Carolyn’s tent had the fly blow partially off in the night and we had a pot blow away, but otherwise everything was fine.
Sunday morning we packed up super fast and headed down in a white out and pretty high winds.  We navigated by map, compass and GPS but overshot a bit and ended up on the wrong side of the Sugarloaf heading toward the Paradise Glacier. Carolyn was great with the GPS and I worked the map, compass and altimeter. We worked well as a team to problem solve and even though we make decisions really differently (Carolyn is analytical and I’m more of an intuitive thinker), I was reassured that we were coming to the same conclusions about things.
We figured out we were on the wrong track in good time and ascended back up to where we could traverse back over to the Muir Snowfield.  We got to the big triangle junction on the Skyline Trail just below Panarama Point at around 1:30pm on Sunday.
We then walked back and forth in a complete white out trying to find the least icy slope to head down.  We had the sleds which made down climbing the ice pretty scary and we couldn’t see what was below to drop the sleds or know what the run out would be if we slipped.  The ice was a thin layer sitting on top of heather and rocks and with the sleds, we were freaked out trying to down climb it. We had a rope and talked about lowering ourselves or the sleds but not being able to see the bottom left us a little unnerved about this plan.
At 2:30pm on Sunday, we made camp on the Skyline trail.  It was a little frustrating knowing that we were so close to the parking lot (next to a trail sign actually) but the winds were gusting, the snow had turned to rain and the visibility was too poor for us to comfortably descend.
We melted water, ate the rest of our food and hunkered down in my tent for the night. We were pretty soaked through, but for the most part (except Leigh Ann’s feet) were warm and slept well.  We had a PLB but never considered activating it as we didn’t think we needed to.
At one point Monday morning before dawn, Leigh Ann got up to go to the bathroom and could see the lights of Paradise and the snow plow going up and down the road during a brief clearing of weather.
In the morning, conditions were still socked in but a little better.  The wind had died, there was fresh snow.  We could almost see the bottom of the icy slope we needed to go down.  We let loose our sleds so that we could see the fall line, decided that we were good with where we would end up if we slipped and cramponed down the ice. By this point there was a little covering of snow over the ice which helped make the ice grippier.
Pretty quickly after that, we picked up the gigantic boot/ski trail and were back to the parking lot by 9:30 AM Monday morning just as every MRA person in three counties pulled in to the parking lot.  Bree jumped out of the truck and I said “you’re not looking for us, are you?” And then I was surrounded with hugs and support by my very best friends.  I was in tears.  It was really touching.
Meredith was waiting for us at the Ranger Station at Longmire with food, a hot water kettle  and dry clothes.  It was an amazing surprise to see her there.  We are really lucky to have such a competent team leader.
We got a good training out of it and worked well as a team.  Sorry to scare everybody! Bree was really scared. I guess she’s seen a lot of loss of life and limb up on Mt Rainier.  She and some others were pretty certain we were blown off and dead and really we could have been, so I guess we were just pretty darn lucky.
I was really really touched by the response. It’s amazing to know that so many people care about you!  I’ve never felt so overwhelmed by care and concern in my life. 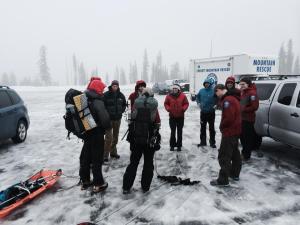 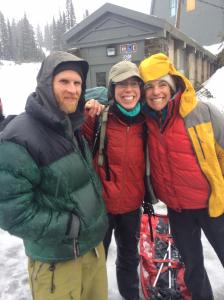